Once again we began our investigations at the Johnson’s Island Military Prison Site at the end of March with the Experiential Learning Program in Historic Archaeology through Heidelberg College. This is the third year we have been working on the Prison Hospital-Block 6. Our work is centered slightly to the east and north of the 2007 excavation. As you can see from the site map, the area we are exploring this year should catch the Block’s front wall as well as continue to explore its interior. Upon close examination of the map, you can detect the small red rectangles that represent the post holes we have discovered the past two years. There is a center line of posts that are placed at eight foot intervals. The two support walls we have discovered are 16 feet apart. Typically we expose 16 two-meter square units, but to this point we have only exposed nine units. These are the units north of the N202, N204, and N206 lines. 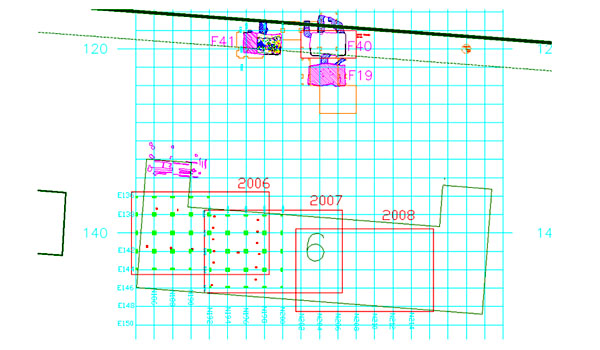 It is my intent to utilize the archaeological field school, which has just started, to finish the units within Block 6 and explore the northern half of Feature 40. This is a latrine used by the sick prisoners of Block 6 during the later part of 1862 or early 1863. The latrine was first identified in 1996 while exploring Features 19 and the southern portion of Feature 41. The latrine was not explored beyond recording most of its dimensions. We still need to expose its northeastern corner prior to beginning our excavation of the latrine itself. This will be the fourth latrine from the hospital we have explored and with its excavation, there should be a tremendous amount of data to more fully comprehend how the prisoners were medically treated throughout the war.

We have made some interesting finds this year in the excavations of the Block.

One of the most interesting finds is what we believe is the top of a plunger of a syringe. Most period syringes that I have seen are clear glass and do not have any letter embossed at the top.

My hypothesis for this artifact is that the “F.” stands for female, and this was part of some type of medical kit that the surgeons at the prison were utilizing at the prison. I hope we will learn more about this artifact as more research is conducted.

One of the first artifacts we recovered this year is this glass stopper from a medical bottle. It has ground glass sides and is in quite good condition except for the top “finial” missing. However, it is representative of the activities which occurred within this Block.

A third artifact we recovered this year is made from pewter. This is one that I do not have an explanation as to its use. From the side, you can see the intricate design along the edge. It appears to have been a type of cap to some medical instrument, but I have not been able to find any examples of this in resources that I have available.

FS 7261 is by far the most exciting artifact we have found this year. It was recently recovered from our work in Block 6. As you can see, it is a small ring made of hard rubber (probably for a female) with three gold insets. The insets have initials engraved on them: a “W” on the left, “G.S.” in the middle, and “B” in the right. The workmanship is exquisite. There were jewelers as prisoners at the site who could be commissioned to make and engrave rings. This is certainly one of the finest examples from Johnson’s Island. If the “G.S.” represents the initials of the prisoner, then there are at least 20 or more that could be the owner. When we have time, we will explore the possibilities and try to speculate more about the identity of who may have lost this ring while convalescing at the hospital.

That’s it for now. You will be hearing from my students in the field school as well as updates from me. With this being their second day, they are just getting used to the many tasks they need to become familiar with how archaeological materials are recovered. Here, two are learning how to use the cameras for recording the materials as they are encountered. Their personal shots were taken today as part of their exercise in their first use of the camera. Look for much more in the next weeks!

This entry was posted on Tuesday, June 10, 2008 at 12:39 pm and is filed under Field Reports. You can follow any responses to this entry through the RSS 2.0 feed. Both comments and pings are currently closed.