One of the many things that take place during our field school is the excavation, discovery, identification and recording of features. Features are identified during the course of excavation at Johnson’s Island Civil War Prison. A feature is an identifiable variation or change in the soil involving color, composition or texture. These can be identified most often during excavation of the soil when it is not overly dry or saturated by water. This season we have been fighting the effects of large amounts of rainfall, so that has made the timing and timeliness of excavation difficult in the sink/latrine that we are uncovering. Although the hospital Block we are excavating is under the weather port, the quantities of rain that have been falling have made even that challenging. Regardless, we continue approach our recovery of cultural material and recording of data tirelessly and with enthusiasm under the guidance of Dr. Bush. 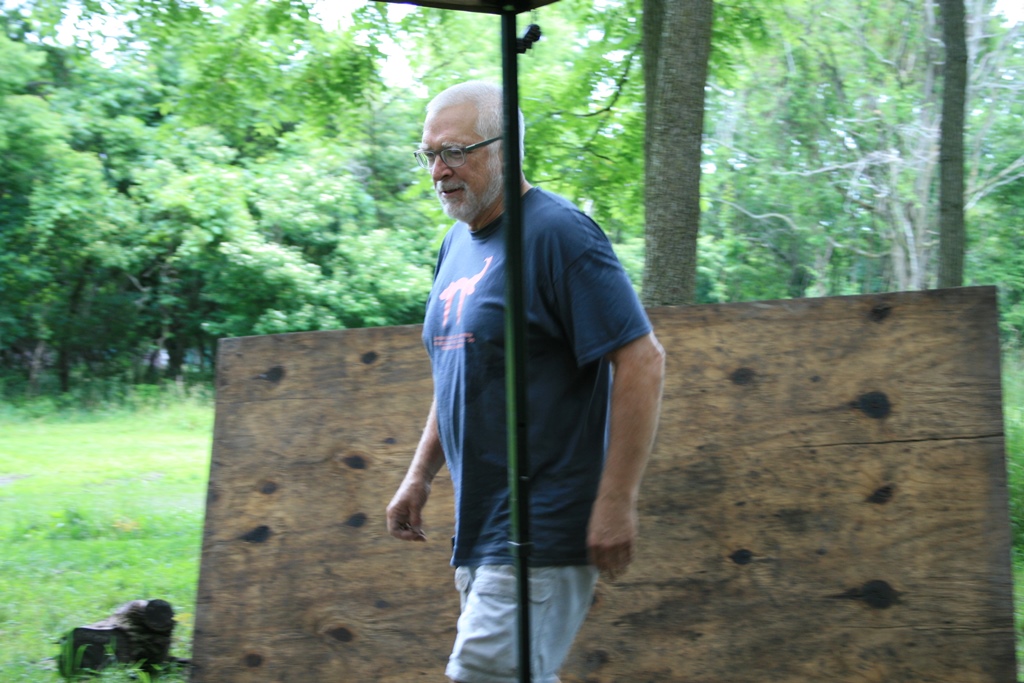 Dr. Bush at the latrine site

The first step in the discovery of a feature is to dig down the plowzone. This entails removing the top layer of remnant grass, roots, and other surface materials that keep the soil from eroding. Once we get past the top most few centimeters of soil, we begin working the units down until we reach the subsoil. As each unit has been freshly excavated we then quickly set out the features using pins to outline the obvious intrusions into the subsoils. Before the subsoil dries out and it becomes too difficult to identify the features present, we have to place pins along the outline of any areas darker than the usual subsoil as a way of marking out the features, allowing us to properly identify them based on their shape. 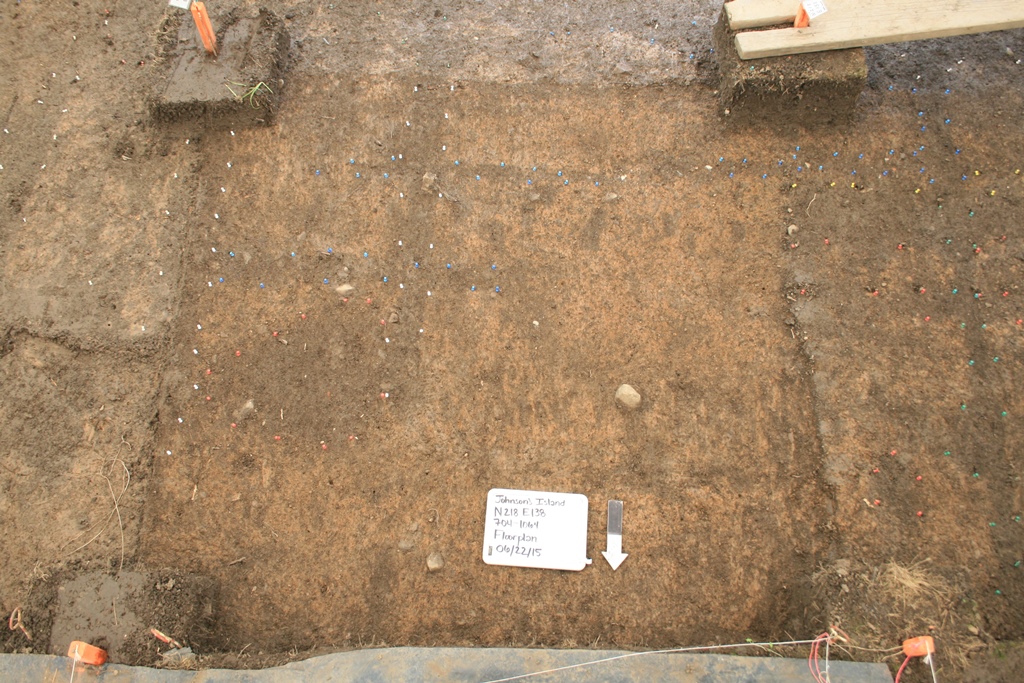 A 2m2 with features outlined

Features tend to include areas of plowing, post holes, and ditches, all of which appear much darker than the surrounding clay and possess unique shapes that stand out even more after being pinned. From there we move on to recording the features.

Recording what we have found is an important aspect of the excavation process, especially when in regard to features. This involves not only photographing the extent of the feature, but also the use of a transit (or in our case a Total Station) to document the horizontal location and area of the feature. 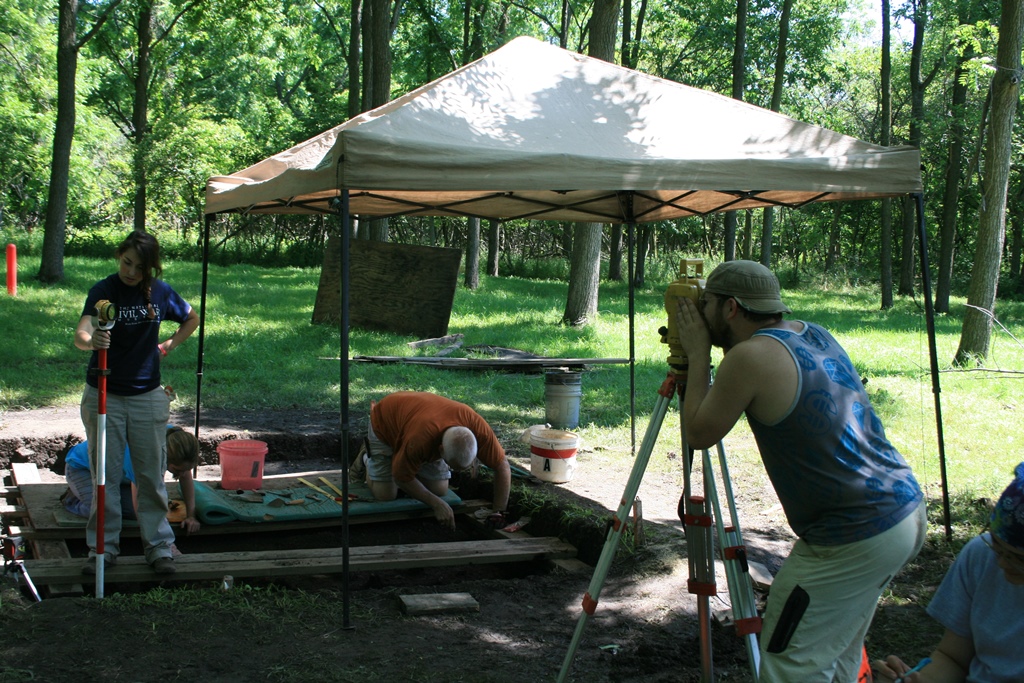 Recording Cultural Material in the Latrine

When we are going to photograph a feature we first grab a white board and write down all of the provenience information (name of the site, northing and easting, the 704 number, what we are photographing, and the date) to ensure that we can know exactly what we are photographing when analyzing the pictures back in the lab. Once the white board is filled out we place it in the feature (if the feature is large enough) along with an arrow denoting the location of North and take a picture from the top of an 8-foot ladder. 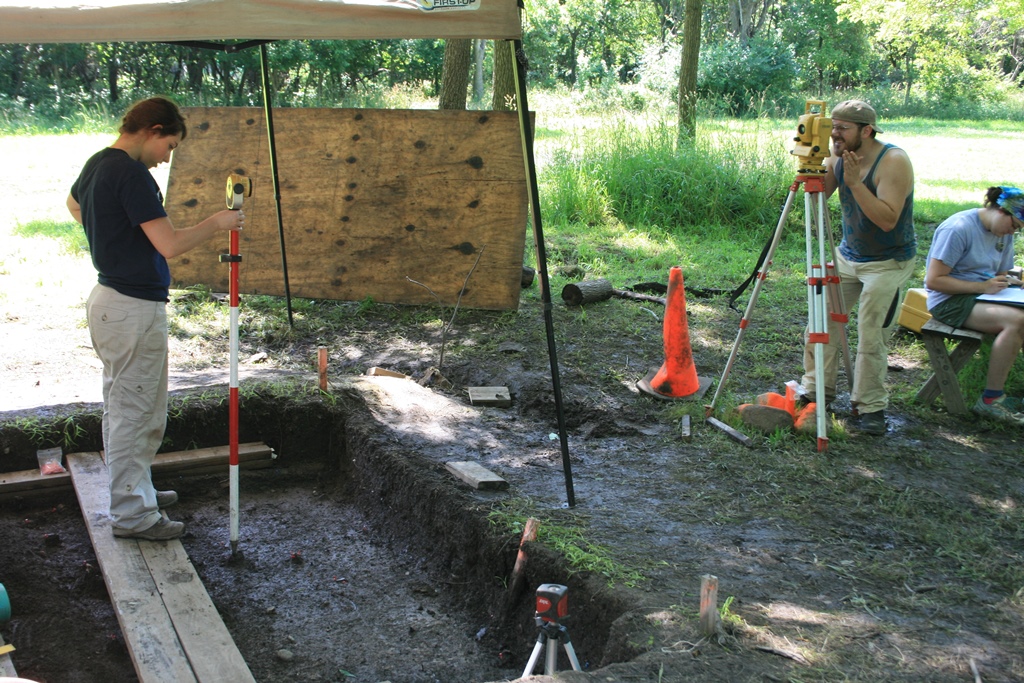 All involved in the recording of data

After mapping comes the really fun part: digging. However, excavating a feature is different from plow zone excavation in a number of ways. First of all, cultural materials in the plow zone have lost their original context due to the mixing of soils. We care about the unit we find them in, but not the exact coordinates as when finding artifacts in a feature. Additionally, in the plow zone we dig at a faster rate than in a feature because artifacts do not have to be pedestaled or worked around. The two features we have been excavating are a latrine and a posthole. When working in a latrine, soil coloration is very important. Undisturbed soil with high clay content will represent the outside and edge of the latrine, while a mottled mixture of clay and other darker soils will represent the inside (anthrosols). It is important to pay attention to soil changes in a latrine because they can show you the dimensions as well as other surprises (such as the escape tunnels at JI). Finding artifacts in situ is also extremely important in feature excavations. Once you get past the plow zone, cultural materials are still in context. This means that their precise location and orientation to other artifacts is crucial and must be properly handled. When an artifact is encountered, it must be pedestaled so that it remains at its original height. For example, when we excavate a level in the latrine we go down 10cm. If we find an artifact half way down the level, the artifact pedestal will be 5cm tall. Although it is ideal that the artifacts remain somewhat encased by the pedestal, sometimes they come out in the excavation process. If this happens, the artifact should be replaced as close to the original spot as possible. Posthole excavations are done a little differently. They are recognizable by their “dark stain” appearance and can be circular or square in shape. Once the area has been pinned, it will be excavated 1 cm at a time. It is excavated at such a small rate because postholes are very unstable and can disappear from one centimeter to the next. 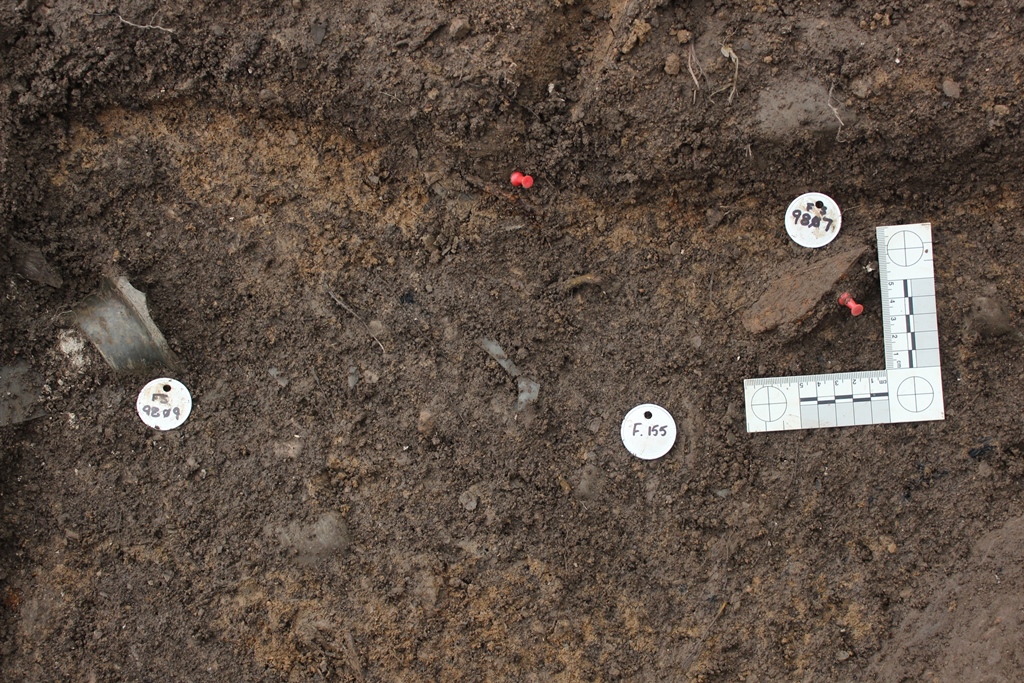 Artifacts ready for mapping from Feature 155, a wall trench

Although finding, mapping, documenting, and excavating a feature takes much longer than simply working in the plowzone, it is amazing to see all of the artifacts that come out. The Block 8 Latrine that we have begun work on will not be finished for a few field seasons yet—not until bedrock or sterile soil is reached—but as we work level 1 down, we are already finding bone, glass, and Civil War era wood. What lies beneath remains a mystery, but it will certainly prove interesting.

This entry was posted on Thursday, July 2, 2015 at 8:13 am and is filed under Field Reports. You can follow any responses to this entry through the RSS 2.0 feed. Both comments and pings are currently closed.