Over the past 3 weeks we have found many Field Specimens (FSs) which we defined in a previous article. We discover FSs while we are excavating or while screening through the soil. On Johnson’s Island we find artifacts from not only the Civil War, but from past Native Americans use. Getting to see each item gives insight to the way things were long ago and that is exciting. 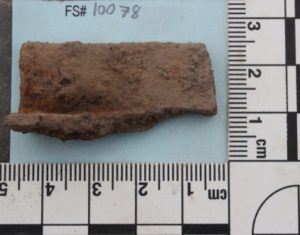 [Phillip writes] A particularly interesting discovery so far occurred in one of the units from just outside the prison hospital. The field specimen collected is identified simply as metal fragment. The item is about 3 cm long and about 1 cm tall. It is made of iron and is rusted giving it a reddish, blackish color. It’s been hypothesized as being something from a farmers plow to possibly being part of a door hinge. The ambiguity of its purpose is what strikes it as different and subsequently interesting.

[Katie writes] The most exhilarating feeling while at the site is when you find an FS. I have found a total of nine so far and each of them has been very different. The FS that I have found most exciting that I have found was an iron button. It had the names Kaufmann and Sohn written on it. It also had New York on it. The fact that we know the state and the people who made it is very neat. The button was most likely on a shirt or trousers. Kaufmann and Sohn were in business in New York during the time of the prison’s use. 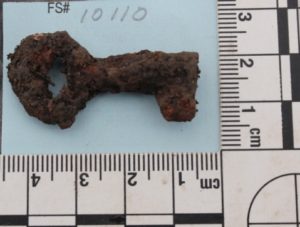 [Rebekah writes] Over the last three weeks multiple Field Specimens were found. Three interesting pieces discovered was the base of a crystal inkwell base fragment, a rim of a teacup made of yellow ware, and an iron key. The crystal inkwell base fragment was found insitu on the second level at 53cm of feature 14, which was a latrine from Block 8 dating to 1863. The iron key was also found insitu on the same level of the latrine. It was located at the depth of 58cm. The yellow ware rim of the teacup was discovered in the screen and came from the unit of N222 E144 from the plow zone. All three Field Specimens were exciting finds and added to the experience and knowledge of Johnson’s Island.

This entry was posted on Friday, July 8, 2016 at 1:22 pm and is filed under Field Reports, From the Students. You can follow any responses to this entry through the RSS 2.0 feed. Both comments and pings are currently closed.