This is my 30th year investigating the Johnson’s Island Civil War Prison site. It is difficult to believe that I have spent so much time at just one archaeological site. Part of the fascination with this site is that it is so unique, and there are so many more research questions to ask than can ever be investigated in one lifetime. I have been honored to have had the opportunity to explore this site and also the help in its permanent preservation through the purchase of 17 acres by the Friends and Descendants of Johnson’s Island Civil War Prison and seeing it designated as a National Historic Landmark in 1990. This year we reached over 10,000 field specimens in the archaeological catalogue, all specifically provenienced.

For this year, I wanted to finish up a couple of areas. The Block 4 excavations had been conducted years ago, but a small portion needed to be excavated. For Feature 14, we had opened up the northern portion two years ago and now wished to finally get it completely investigated.

During the spring and summer of 2017, a portion of the investigations of Johnson’s Island consisted of the western wall of Block 4. Years earlier, the excavations had missed the last row of units along that wall. It was hoped we could uncover post holes and any trenches associated with this side of the building.

Additionally, we hoped to finish the excavation of F14, a latrine associated with Block 8 and thought to have been open in early-mid 1863. At the end of the 2016 season, several wooden planks had been exposed in the latrine, suspected of shielding contents going into the latrine from those dedicated prisoners trying to dig a tunnel to freedom. By the end of this year’s excavation, we should have explored this tunnel. 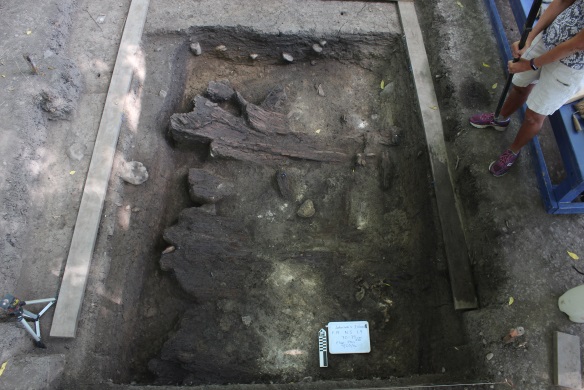 This entry was posted on Monday, June 26, 2017 at 10:13 am and is filed under Field Reports. You can follow any responses to this entry through the RSS 2.0 feed. Both comments and pings are currently closed.