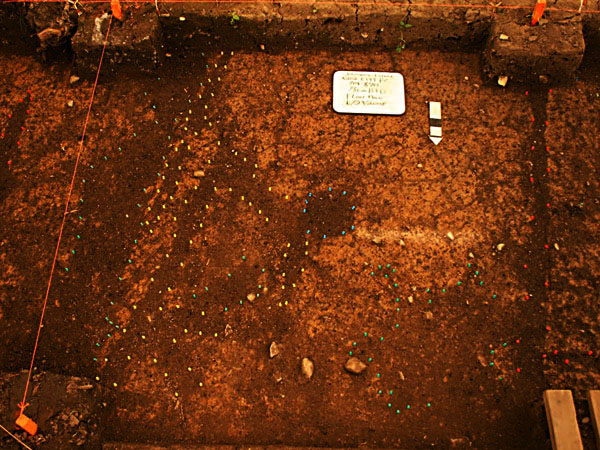 Floor Plan of N202E144 showing one of support post holes

This past week we have been rotating between excavating some of the Hospital Block units and the newly opened latrine (Feature 40).

As we continued working in Block 6, the Hospital Block, we excavated down to the subsoil, which is much lighter colored soil than that of the plow zone, which is soil that has been historically disturbed. When we cleaned up the units (scraping a clean, level surface at the interface, leaving as little loose soil as possible) there was a visible difference between disturbed and undisturbed soil, which showed us where the post holes of the hospital had been, along with several plow scars from when Mr. Johnson farmed the land in the early twentieth century. 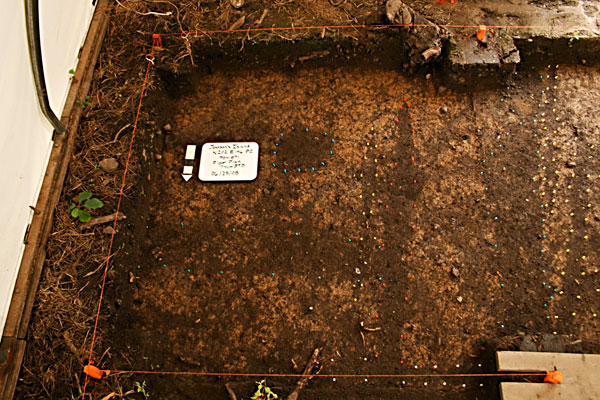 We used different colored push pins to outline these defined features and then photographed the finished units from above on a ladder. We have located the center post for the hospital block as well as the eastern wall post. In finishing some of the Hospital Block units we found a bottle finish, a ceramic rim piece, a shell button, a utensil fragment, and a hard rubber disc most likely used for craft. 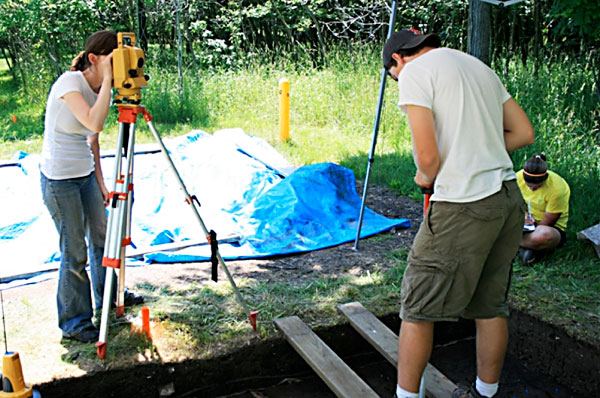 In addition to photographing the units we got more practice using the transit to map in the locations of the different features as well as a few field specimens that had been found. It takes three of us to use the transit–one to hold the reflector rod steady at the location, one to work the actual transit, and one to record the coordinates of the location.

Outside, working on the latrine, we have been discovering more and more cultural materials as we progress. One edge of the latrine is more difficult to excavate because of a substantial number of rocks which we think may be there because of tunneling by some of the prisoners. 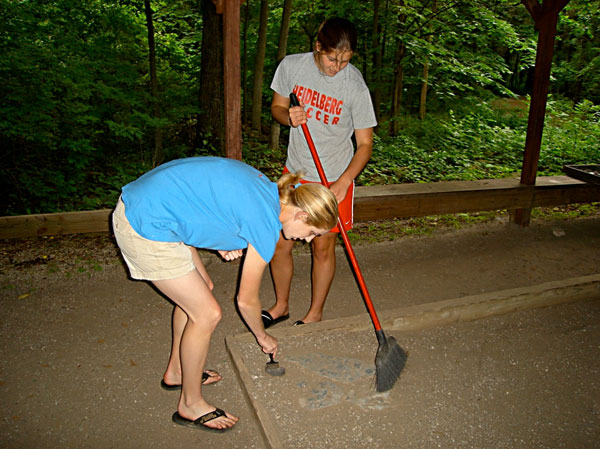 We have been digging only a few centimeters at a time, and working with extra care because the latrine is below the plow zone and has not been disturbed much since the materials were deposited during the Civil War. Here we leave even the smallest pieces of cultural material in situ, or in their original location, until it can be determined if there are any associated artifacts nearby or until they can be mapped in via the transit. So far we have found a large piece of cut shell, a copper grommet, an iron button, along with some ceramic pieces, a few nails, some glass, bone, and a piece of tin can.

This entry was posted on Monday, June 30, 2008 at 6:13 am and is filed under Field Reports. You can follow any responses to this entry through the RSS 2.0 feed. Both comments and pings are currently closed.