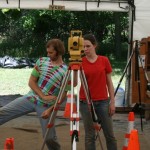 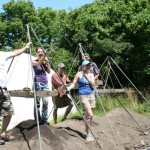 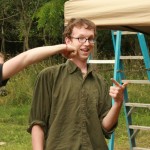 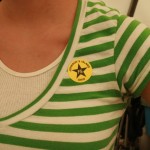 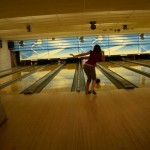 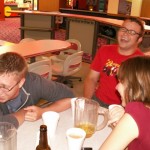 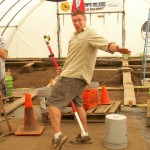 In the beginning, it all looked the same. Bucket after bucket, screen after screen, a seemingly endless supply of very small rocks filled our working days. But as we approached the end of that first week, we began to look into those screens from a new perspective. It was not simply a bucket of dirt we were sifting, it was a mysterious mix of discovery and possibility, waiting to reveal its secrets to us. Yes, there were rocks, lots and lots – and lots – of rocks, but we quickly came to appreciate their true potential, the potential to draw us in, make us question, and, in doing so, provide us a glimpse into our own history and culture.

“The most exciting find for me was the hard rubber ring.” Hannah

“I have got to say that my experience at Johnson’s Island will remain one of the highlights of my education. I have learned much in the field of historical archeology as well as made a slew of new friends. My favorite part of the curriculum occurred in the last week. Dr. Bush demonstrated the basics of flint knapping; a skill I very much would like to develop.” Juli

“The most exciting find that I found was a piece of green glass embossed with ‘PT’.” Darcy

“To me, the best part of this field school was being able to find and learn about historic and prehistoric artifacts and features. Unlike some other sites with both types, here they were independent . The prisoners and builders of the prison were probably oblivious to the Native American hearth below their feet. My favorite aspect of this experience was the opportunity to interact daily with artifacts from many periods.” Marc

“I liked this feature [the hearth] because it was visible and marked by more than stained soil.” Brittany

“The Johnson’s Island Field School was my first glimpse into the world of professional archaeology. It has been intense, enlightening, and rewarding.” Phil

“I enjoyed finding a couple of buttons which would have been on trousers. I have sewn many of these on men’s pants as a civil war re-enactor and find it interesting to discover two original versions of something I’ve so frequently used.” Beth

As we wrap up this, our final report, we consider the fact that archaeological field work is, in many ways, about numbers – 2 x 2 square meter units, N212 E140 North Easting coordinate, 84 centimeters Below Temporary Datum (BTD) depth, 12 flakes of chert found in the screen. As the 2009 Johnson’s Island Field School is about to end, and we reflect back over the past five weeks, we have decided to give you few of our own numbers as a going away present:

Number of days spent excavating on the site: 24
Number of miles traveled in the van to and from the site: 2,160
Total hours spent in the van: 64
Number of hours spent in the archeology lab: 15
Number of 2 x 2 sq meter units excavated: 15
Number of building post hole features excavated: 3
Number of prehistoric cooking hearths discovered and excavated: 1
Number of Field Specimens unearthed and cataloged: 90
Total number of Field Specimens cataloged at Johnson’s Island since 1989: 8,042
Number of bone, flint, nail, glass, brick, and ceramics unearthed by a single field team: 2,138
Number of times field crew stopped for ice cream on the way home: 4
Highest Fahrenheit temperature in degrees recorded in the work tent: 101
Number of meter sticks accidentally broken: 2
Number of stores in area selling replacement meter sticks: 0
Number of 2009 Field Crew who thinks field school rocked this year: 10
Number of who would return next year: 10

It has been a great experience, and we appreciate all of you who have been following our progress over the past weeks. See you next year!

This entry was posted on Tuesday, July 14, 2009 at 1:35 pm and is filed under Field Reports. You can follow any responses to this entry through the RSS 2.0 feed. Both comments and pings are currently closed.