by the 2008 Archaeology for Educators Field Crew

Currently, a group of Heidelberg College graduate students is participating in a class titled “Archaeology for Educators.” We are continuing the work at Johnson’s Island Prisoner of War Depot, excavating in two main areas: part of the hospital block and one of the hospital’s latrines. 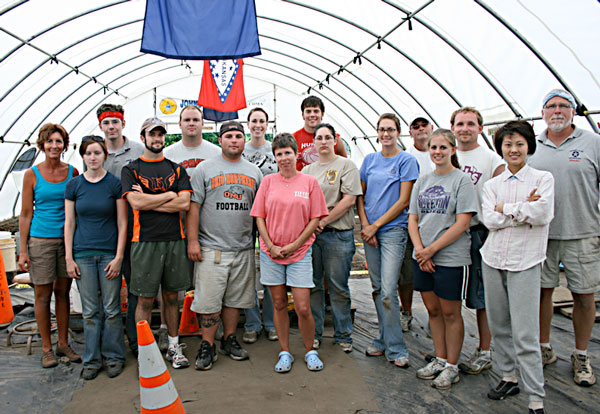 Drs. David Bush and Marcia George, the instructors of the program, provide us educators with an experience similar to what is provided for school groups visiting the site. As an introduction, we began with an activity in the Confederate Cemetery near the archaeological site. We looked for patterns of human behavior in the arrangement and design of the cemetery. Based on our observations, we made hypotheses about our observed patterns. Next, we went to the site and were instructed on the basics of excavating. As our students would do, we were introduced to the game Dig Bingo, where when items are found they are identified and placed into a category like contraband, hygiene, or prisoner wealth. 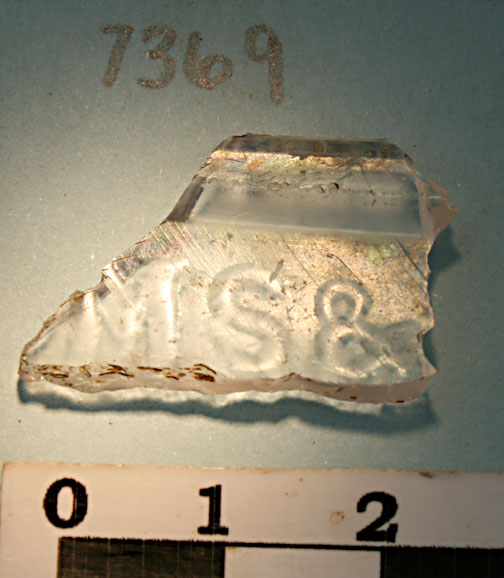 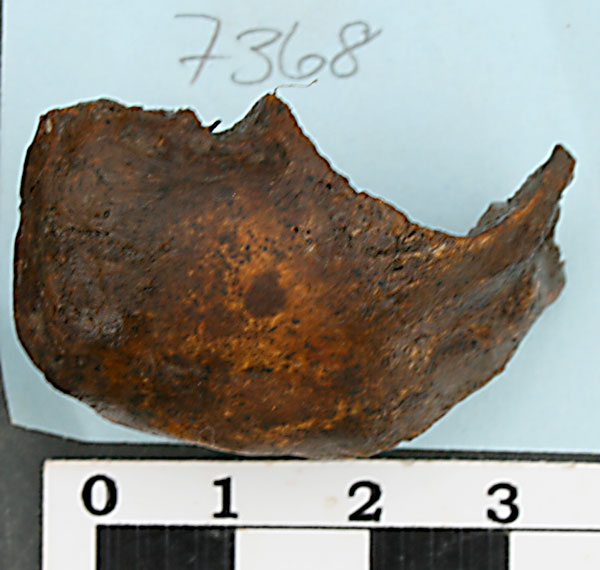 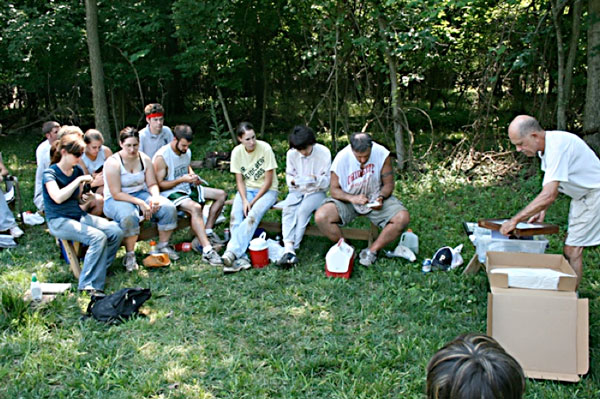 Mike Woshner speaks to the group

In addition to the excavation, we are learning the historical context of Johnson’s Island. Each day we read primary documents such as Civil War prisoner journals and letters. We receive a multi-vocal perspective by examining the journals and letters from several prisoners from Johnson’s Island and Andersonville, as well as considering the views of Federal guards at the Johnson’s Island. We also toured the well-preserved remains of Fort Johnson. Furthermore, we examined previously excavated artifacts from the site such as various bottles, a prisoner-designed ring, and a hard rubber comb. As an additional learning experience, Mike Woshner (author of India Rubber and Gutta Percha in the Civil War Era) worked with us and spoke on hard rubber pieces from the time period. These experiences lead to great conversation and allow us to make meaningful connections to the items we find.

In Block 6, the hospital, we are continuing to uncover small artifacts, which would have been swept in between the floorboards. As we excavate to deeper levels, we continue to find more nails, brick, glass, flint, and pieces of bone. Most of the glass we have found appears to be from windows, but several pieces have been embossed from Adams and Faye medical bottles. In addition, some pieces of white pottery and yellow ware have been uncovered. Recently, we’ve uncovered mortar, glass, and an intact nail. These items in the transit have been mapped out. Therefore, we are also learning about the importance of data collection in archaeology.

Larger artifacts are being uncovered in the latrine. Several parts of pipes, yellow ware, tin cans, teeth, buttons, rat skulls (FS 7368), and large lime deposits are all currently being recovered.

“Archeology for Educators” is proving to be a fruitful class for the educators involved. We are able to appreciate the uniqueness of the Johnson’s Island site in its welcoming of us and of grade school students. As educators, we are amazed by the opportunities available at Johnson’s Island. Given the chance to engage in archeology, students are truly engaged in the wonder and joy that occur in hands-on, meaningful learning. It is an unforgettable experience. 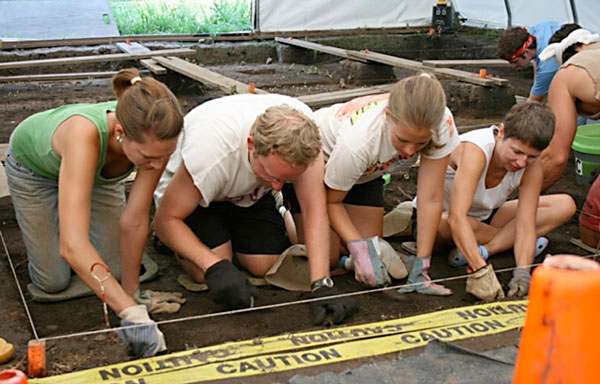 Working at the site 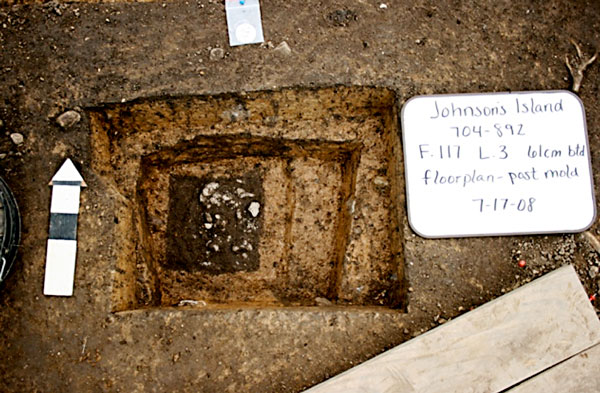 It seems the summer has gone again so quickly. We have had a great deal of excitement in our excavations thus far, and what is planned for later this fall certainly will be a fitting conclusion. We are down about 20 centimeters into the Block 6 latrine and anticipate another 20 centimeters to go. We are just getting to the clay layer which was placed into the latrine when it was finally closed, so underneath this clay will be the layer of “night soil” which should contain artifacts lost while in use. I expect that we will get into these layers with our students this fall.

We have also excavated the second central post hole down to the actual post mold. F117 has been exposed to the point where just the post mold is present. As you can see from the picture, left, there are many pieces of mortar in the actual area of the post. We will be excavating out this post mold as well later this year, but don’t anticipate the depth to run more than 2 centimeters. 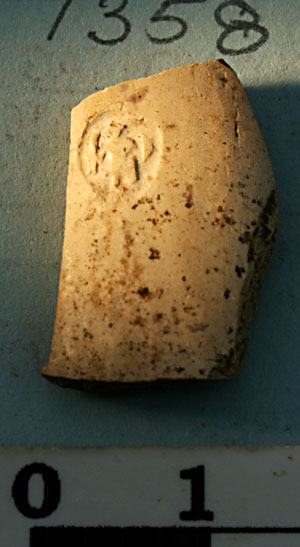 One of the many interesting artifacts that we have uncovered this year was a portion of a kaolin smoking pipe bowl with an unusual maker’s mark (FS 7358). Having no luck in finding it referenced in the few books I have on maker’s marks for pipes, I sent a picture of this to Smoke Pfeiffer, an historical archaeologist who has spent much time studying smoking pipes. He informs me this mark is called “krijgsman” and is from Gouda, Holland. It was used on ceramics made between 1670 and 1887. The mark has been found on at least one other Civil War site, in South Carolina. How common this mark is I do not know at this time.

We discovered three bone buttons this past year from the hospital and the latrine behind the hospital. FS 7151 and FS 7282 are very common bone buttons which we typically uncover. FS 7378 is a two-hole button that is quite unusual. As you can see, the button has a different overall design as well as only having the two holes. It is in excellent shape and came from F40, the latrine. At this time I am not sure if the number of holes is significant to its use, but we will have to see. 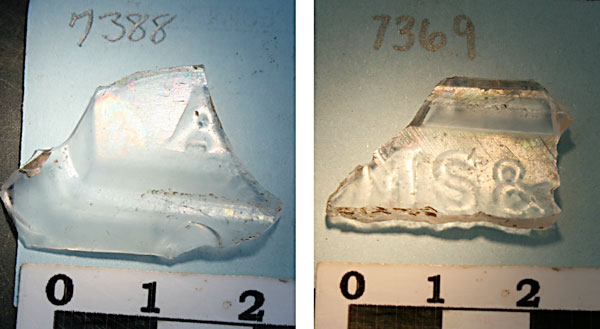 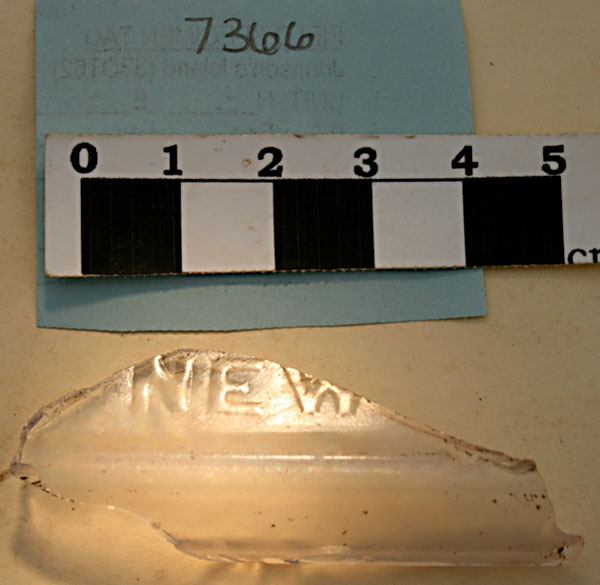 Pieces of an Adams & Faye bottle

We have also found three pieces of an Adams & Faye patent medicine bottle from New York. This presents an interesting question as to exactly how many bottles are represented by these three pieces. One might say three, but in fact, it may just be one. Although because of the lighting used to photograph them they look a bit different, they are all essentially the same color and thickness. Therefore, since they do not repeat any letters from the two panels that have embossing, they may just represent one bottle that had broken. On one side panel is the name “ADAMS & FAYE” and on the other panel is the name “NEW YORK”. I don’t have much information about the maker of this patent medicine. This is not one of those medicine bottles from the Civil War that is reported much. This does raise the question as to why it is found so abundantly at Johnson’s Island. We have found several complete examples of this bottle in various contexts at this site. 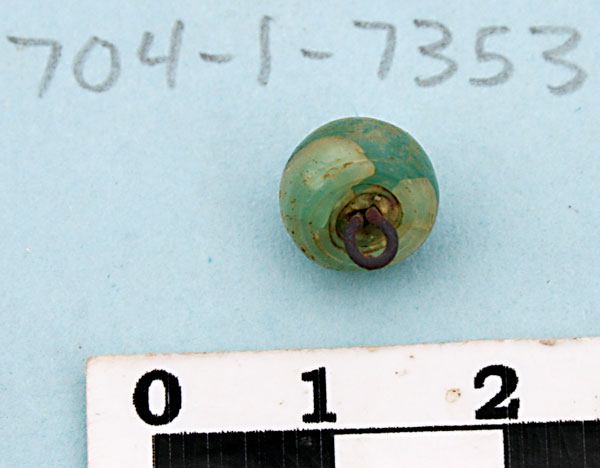 Finally, we have also found this past week a glass button. This is truly a glass button. Many times in the past, ceramic Prosser buttons were misidentified as glass. However, this is an aqua green round glass button with a copper loop. I believe this is the first such find we have made at Johnson’s Island. I hate to say this, but again I am not sure exactly what garment this was used with, but one suspects maybe a fairly fancy shirt. Any information for any of these items shown would be most appreciated!

As always, there will be more to come as we continue to analyze what has been found and probe further into the latrine.

This entry was posted on Monday, July 21, 2008 at 7:19 am and is filed under Archaeology for Educators, Field Reports. You can follow any responses to this entry through the RSS 2.0 feed. Both comments and pings are currently closed.