The following was prepared by the students participating in the excavations at the Johnson’s Island Civil War Prison site this summer as part of the Heidelberg University Archaeological Field School.  Since they are excavating within the former location of Block 8, they have decided to present some historical information on life in the block during its time as a prison.  However, the pictures reflect the student’s experience recovering the archaeological evidence. 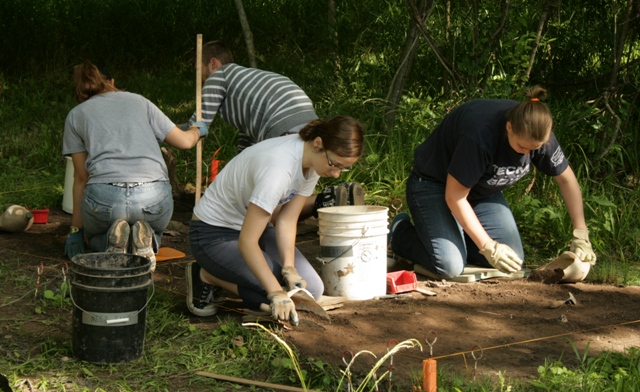 Beginning the exposure of Feature 124, a Block 8 latrine

The basic day in Block 8 on Johnson’s Island went as follows. Prisoners woke up around six for breakfast consisting of coffee, bread, and beef (fried or boiled).  There was no leaving the quarters until the garrison raised the flag (which was a little after sunrise). This was followed by roll call and count was taken.  No Confederate ranks were recognized in roll call.

After breakfast, the ice man and milk man came into the prison and the sutler would sell (at fixed prices) vegetables, clothes, and newspapers like the Sandusky Register, days-old copies of the New York Herald, and the Cincinnati Enquirer (which was later banned because of secessionist attitudes).  Other items sold were fruits, butter, writing paper, tobacco, smoking pipes, shaving equipment, and other personal items.  Clothes, however, were very limited; the official limits on clothing were one suit of clothes, no boots and only shoes of poor quality, and in winter coats were available.  The sutler operations were halted several times in retaliation for how federal troops were treated in Southern prison camps.

Mail would arrive at ten A.M., with morning rations distributed at the same time. In April of 1864, rations included:

Water could be gathered from either of the two pumps located in the camp. Otherwise, when the pumps were either broken or frozen in winter, it was gathered from the lake.  Early in the war, other services located in the camp were a bakery, lemonade, pastry shop, and even a brewery.  Also available were tailors, cobblers (shoemakers), laundry services (5cents a garment), artists, a circulating library begun in 1864, barbers, a minstrel show, and jewelers.

Firewood for cooking and heating was brought by wagon.  Dinner was served at noon, after which the men had the afternoon to themselves.  Afternoon activities consisted of walking the grounds, talking (the “grape vine” was the rumor mill), playing ball or cards, reading, and manufacturing furniture or trinkets.  Supper was then served right before sundown.  At sunset the flag was lowered, the drums beat evening retreat and all prisoners were required to remain in their quarters.  At 9-9:30pm it was “lights out.”

Lt. William Peel was one of the Confederate officers imprisoned at Johnson’s Island.  He kept a diary during his stay, and it was later published.  In his entries he wrote about his time in Block 8, where he stayed and slept.  Block 8 held many religious services and payer services for prisoners.  He also mentioned supplementing his meals with rats to help ease his suffering from hunger.  Along with meals and religion, Peel also described the addition of stoves and other changes among the various blocks. Block 8 was also “home” to the infamous Lt. Charles Pierce of the 7th Louisiana, who made many escape attempts in his time on Johnson’s Island.  An attempt was made to tunnel from Block 8 to the wall, but escape endeavors were shifted to the more ideal location of Block 1. 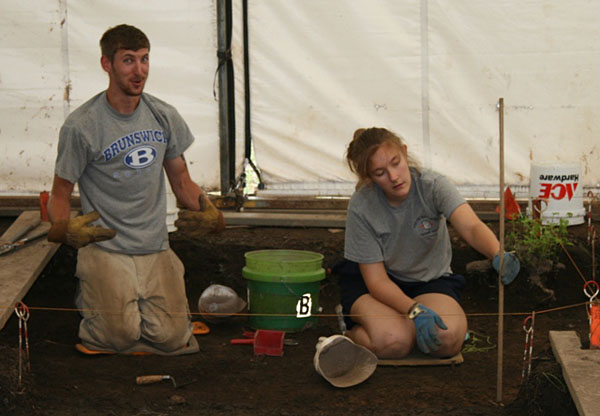 Corey and Felicia working in Block 8

This summer, our excavations are focused on Block 8 and a latrine used by prisoners there in 1862-1863.  Stay tuned for more updates!

This entry was posted on Thursday, June 16, 2011 at 3:47 pm and is filed under Field Reports, From the Students. You can follow any responses to this entry through the RSS 2.0 feed. Both comments and pings are currently closed.