The Fundamentals of Opening a Unit 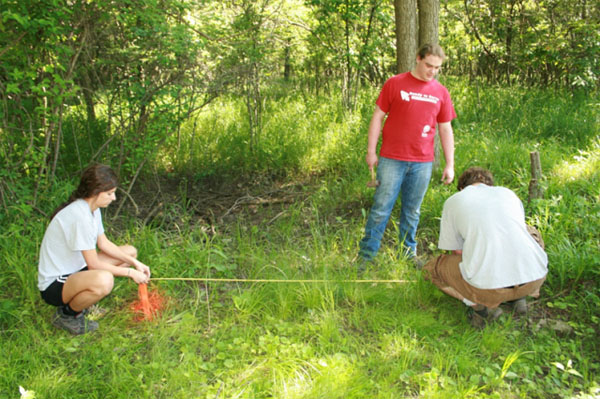 Before excavations begin, a unit must first be surveyed and located. This week, we opened two units above the location of one of the latrines associated with Block 8. We set up a total station (also known as a theodolite and an electronic distance measurer) which is used to map specific coordinates based on a predefined point, or datum. First, we aligned the station to the datum, and then we used the locations of last year’s units in the southern half of the latrine to establish the boundary points of our two units. Then, using the station, we projected a point two meters north of the older center point. From there, we generated two two-meter square units which we verified using the total station. These we then marked with fluorescent orange wooden stakes, and strung line between them. We labelled the stakes with their respective provenience numbers relative to the datum point. Chaining pins were then used to mark points and create balks, sections of earth that allow boards to be placed along the borders of each unit, and help mark excavated areas for future archaeologists.

After the units were marked, we removed the majority of plant life above the root from with the units, except from areas on top of the balks. Dislodging these roots would disturb soil strata, and potentially remove artifacts without our notice. We collected this plant refuse and put it in buckets, which we set aside to screen later. As with all excavated material, it is important to make sure the buckets from each unit remain separate. We did this by labelling each bucket with their unit’s provenience number. 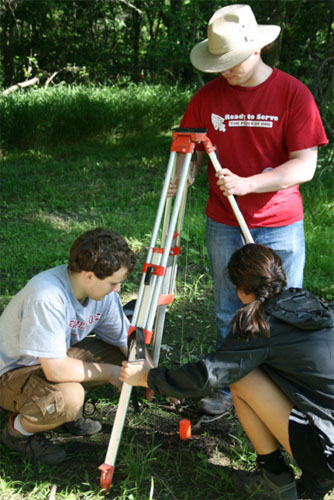 Next, using a plumb bob (a weight suspended on string) and our trowels, we marked the “walls” of each unit with a shallow line cut into the soil. This was done by dropping the plumb bob perpendicular to each line at regular intervals, and cutting a line between each point. At each balk these lines were cut in line with each chaining pin to create a square. After each line was finished, we cut down approximately two centimeters in to the unit, and began to remove any extant root systems, and placed them into their respective buckets. After this stage, we continued downward in further two centimeter intervals, removing any roots and rocks as we went. After the wall at each side of the unit was sufficiently delineated, we further endeavored to bring each unit to a single level, removing any hills and undulations in the process. After these stages were completed, we screened any material removed from the unit, and catalogued any artifacts we found.

The latrine we are excavating, associated with Block 8, could seat several prisoners at once. It served not only as a privy, but as a dumping point for contraband refuse and similar garbage items. The vault of the latrine is contained roughly within the space of four of our two-by-two meter units. Many of the larger intact and best-preserved artifacts unearthed on the Island have been recovered from latrines. This is largely due to the great depth of the latrine vault and the less than savory nature of its former use.

This entry was posted on Monday, August 1, 2011 at 8:00 am and is filed under Field Reports. You can follow any responses to this entry through the RSS 2.0 feed. Both comments and pings are currently closed.